A little bit about Manson 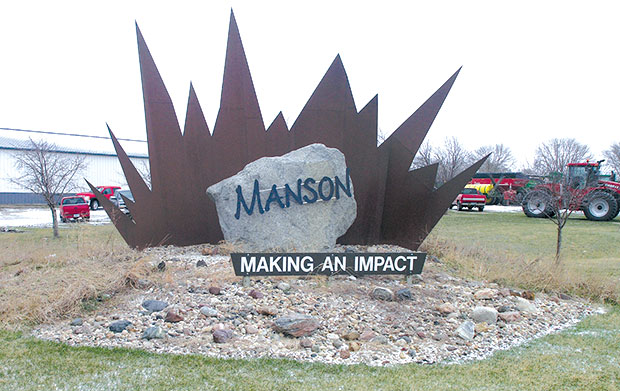 Manson is a progressive community in North Central Iowa, with a population of 1690. The City is ideally located 11 miles west of a rapidly developing Regional Agricultural Business Park and within 5 miles of U.S. Highway 20. The City’s ideal location, central to three major retail and employment centers and within 5 minutes of Twin Lakes Recreation Area continues to make Manson a sought after location for new residents and businesses within the region.

The Manson Chamber of Commerce works closely with the Manson Economic Development Corporation and the City Council to foster growth with the community. A wide variety of programs and incentives (www.mansoniowa.com) are available to encourage the development of new housing, business and industry. The planning for numerous community enhancements and amenities are continuously underway. The City’s most recent project; Main Street Streetscape was completed in the summer of 2019.

Manson’s Claim to Fame; The City of Manson was built upon the site of the Manson Impact Structure, the largest known meteorite crater in the continental United States. The crater, measuring more than 23 miles in diameter, was created when a meteorite crashed into earth some 74 million years ago. The crater now sits approximately 300 feet below the City of Manson. Due to the effects caused by the unique geography of the land, the community was known as the “soft water capital of the world.”

Gateway Enhancement Project; The Manson Chamber of Commerce is the proud sponsor of our unique gateway signage located at the corner of N65 and Highway 7 which creates an impact structure that depicts Manson’s unique geographical history. The intention of this celebrated gateway signage is intended to create a memorable landmark, as well as, to create an impression to those passing by on the uniqueness of our location.

The large boulder in the center of the signage represents the meteorite and is surrounded by sculptured corten steel shaped to represent the explosion of the impact that the meteorite created. The landscape around the setting consists of little bluestems. The silver blue tint of the grass will represent the smoke and heat of the meteorite after it hit the earth.